This section considers the health and wellbeing of adults in the so-called third age, retirement, older age, as well as the end of life.

It is estimated that York is home to 38735 people over the age of 65 which represents nearly a fifth of the total York population. Haxby and Wigginton ward comprises the highest number of older people with 3804 residents. Fulford ward, with a total of 854 older residents, has the lowest representation.

It is now expected that people nationally will live longer lives than previous generations. But how do we ensure that senior members of society are living as healthy and active lives as possible? The information below provides key insights into the areas concerning advancing age, and also where York is performing well and areas that need to be reviewed.

Healthy life expectancy is a measure of how many years of life a person can expect to be in good health for. It is a useful indicator to understand the health of older adults and how a population will experience older age, as well as the potential need for health and social care support. The graphs below indicate that healthy life expectancy for both genders is often significantly higher than the England average. Over the last few years, this has been a steady upwards trend indicating York residents are in better health than those in other parts of England. The data shows that in the most recent period (2017-19) the average healthy life expectancy for females is 66.4. For males, it is 65.8. 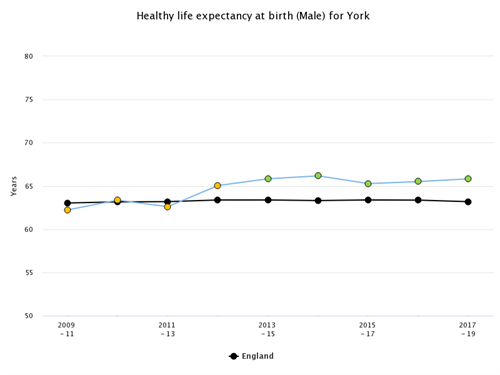 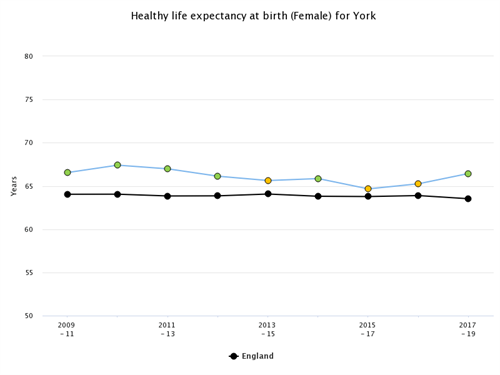 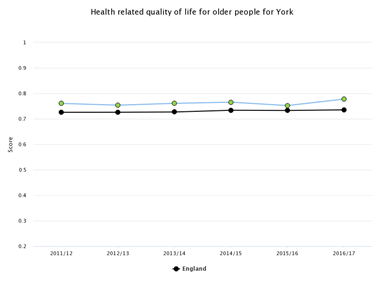 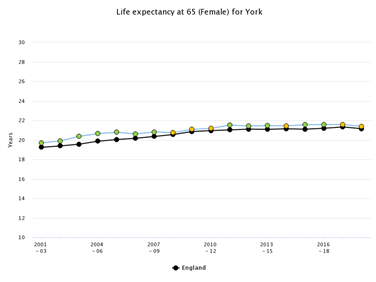 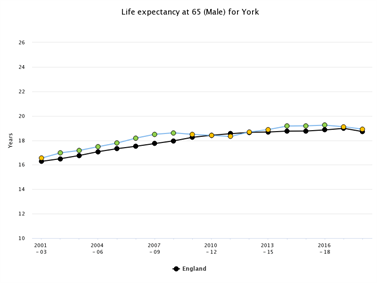 Prior to the Covid-19 pandemic, illnesses that spread from person to person were the cause of a relatively small number of deaths in the UK, particularly in comparison to other countries. The significant effort given to the monitoring, identification, vaccination and treatment of infectious conditions continues for other diseases, such as influenza and norovirus. When we measure the impact of communicable diseases, we often look at the number of deaths as one indicator of how successful these efforts are. Over the past few years, York has had lower rates of death from communicable disease than both the regional average and the majority of York' statistical neighbours. Over the last ten years, York has been similar to or lower than the national average. A separate profile on the impact of Covid-19 is further down the page. 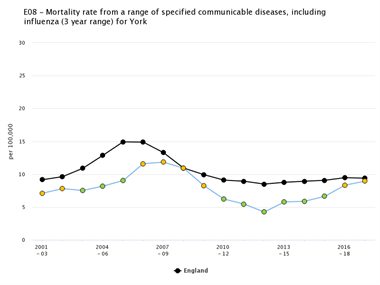 Falls are the largest cause of emergency admission to hospital in older adults, and a common trigger factor in someone moving to permanent nursing home care. York has a higher rate of people who are admitted to hospital due to a fall than the national and regional averages, but a similar rate to York's statistical neighbour data. Until 2014/15 York was similar to the national average, but whilst the national trend is stable, York has risen sufficiently in the last year to be above the national average. This is predominantly due to a rise in falls among women aged over 80 years. Nationally, people living in more deprived areas are more likely to be admitted to hospital as a result of a fall than their peers.

Nursing care homes offer an important and essential service for some elderly people, but a population with a high use of care homes can indicate a reliance on adult social care services and missed opportunities to reduce or delay frailty or illness in older adults. York has a higher proportion of over 65 year olds living permanently in residential nursing care than the national average, and the majority of York's statistical neighbours. Nationally, the data has remained approximately stable. York has broadly followed this trend, but has risen above the national average in the last reporting period and is somewhat higher than York's statistical neighbours.

When older people leave hospital there is an increased risk that they will be readmitted in the days, weeks, and months that follow. Reablement services are intended to support people as they move back home after a hospital stay to prevent avoidable returns to hospital. In York, a lower proportion of people are offered reablement services than the national average and also the majority of York's statistical neighbours.

An accurate and timely diagnosis of dementia is the first step to getting the right help and support. York has a lower proportion aged 65 or older with a diagnosis of dementia in comparison to the national average and the majority of York's statistical neighbours. This means that there is likely to be a larger proportion of adults in York who have dementia but who do not have a diagnosis. There are different measures to look at when reviewing provision of dementia services in York. Data in this area is relatively recent however since 2017 trend data has been calculated:

Estimated diagnosis rate in people aged 65 years and over

The diagnosis rate is calculated by dividing the number of people with a dementia diagnosis by the total estimated number of people living with dementia. In 2018, this rate was statistically similar to rates in England. However, data from the other four years shows that York rates of diagnosis are significantly below the national average. 2021 had the lowest diagnosis rate of 53.2%, which was a reduction of 4% from the prevuious year. 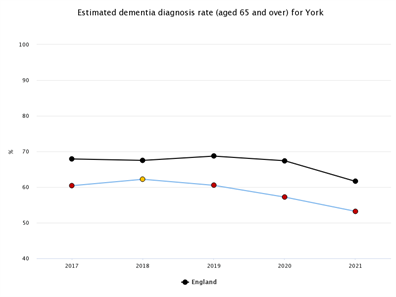 Dementia prevalence in people aged 65 years and over

Prevalence measures the number of people currently living with a disease at a certain point in time. In York, the prevalence of dementia in people 65 years and over has consistently been lower than national figures. Prevalence rates have been gradually reducing since 2018 with 2020 prevalence at standing 3.48% of the 65 years and over population. 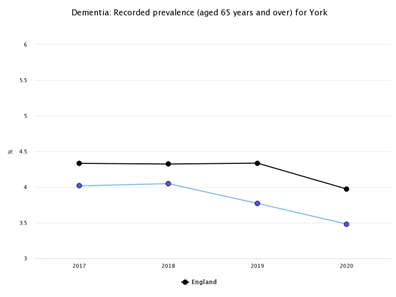 Crude Recorded Prevalence of dementia in people aged under 65 years

Dementia in people younger than 65 is extremely rare. Often referred to as early-onset dementia, people with this diagnosis are likely to have more unusual variants such as fronto-temporal dementia and Korsakoff's syndrome which is related to alcohol. Their circumstances are generally very different to older people living with dementia- most are in employment, have young families, and do not have other comorbidities.

In York, the crude recorded prevalence of dementia in this cohort is very similar to the national average. In 2020, this count was measured at 2.37 per 10000 people compared with 3.05 per 10000 nationally. Trend data below indicates that count values are similar each year and are not forecasted to change. 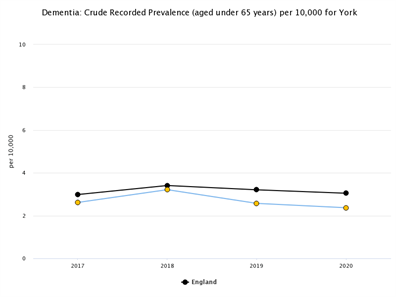 York data has mirrored national trends. Between 2017-19, approximately 75% of dementia care plans were reviewed annually. By 2019-20, this had significantly decreased to just below 40%. As this is also seen nationally, the covid-19 pandemic may a considerable contributor to this change. 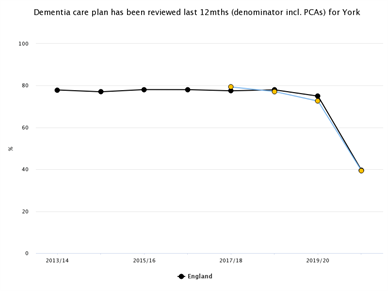 All data has been sourced from www.fingertips.phe.org.uk