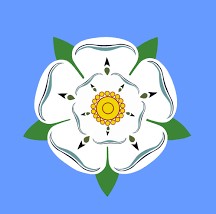 It is vital to ensure that children have the best start in life. Not only does this provide the foundations for optimal health and wellbeing in the future, it helps to address health inequalities at the earliest opportunity.

On average, York has a 0-24 years total resident population of 32.4% compared with 29.8% in England. Children and teenagers from 0-15 years comprise 15.6% locally against 19.2% making this cohort smaller than the national average. However, the percentage of 16-24 year olds is significantly higher than the national average: 16.8% compared with 10.6%. One considerable factor for this is the provision of further and higher education. York has a large Further Education college catering for traditional and vocational courses as well as a number of State and Independant schools and academies. It is also home to two reputable Universities.

Across the Wards, the most deprived has the highest number of children and teenagers 0-15; the lowest rates are seen in those Wards in close proximity to the Universities. The 16-24 years cohort is therefore understandably seen to have the highest representation in such Wards.

Below, are narrative and data concerning the different elements that make up starting and growing well in York. This includes those areas where York is performing well, those areas that need to be address to improve outcomes, and areas of inequality.

A good level of development measures how ready a child is to start school. It considers whether a child has the baseline social, physical, and intellectual skills necessary to engage and learn, but also considers the responsibilities of families and teachers in ensuring children are ready to commence learning.

York has the highest level of school readiness in Yorkshire and Humber with 75.6% of children (2018-19) meeting the desired skillset for key-stage one. This is compared with 66.4% in the lowest-performing local authority in Yorkshire and Humber. York is ranked 19th nationally and is significantly higher than the average of 71.9%. School readiness is an important measure of population health and inequalities; this is because children who achieve a 'good level of development' are more likely to do better in later education. A good education is also linked to better health outcomes in later life. 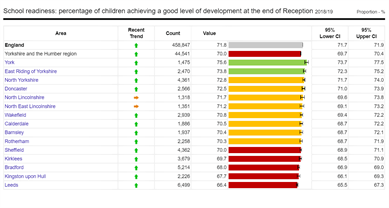 Teenage pregnancy is an important indicator of population health. Younger mothers are more likely to experience unemployment and poverty with an increased likelihood also seen in mental ill health. Nationally, the trend for teenage conception rates among under 18’s has been falling each year since 1998 which generally mirrors the trend in York. There has been a steady levelling of annual rates from 2016 as shown in the graph below with the latest data for 2019 showing York's count as being 16.4 cases per 1000 people. Nationally, the figure is 15.7 per 1000. 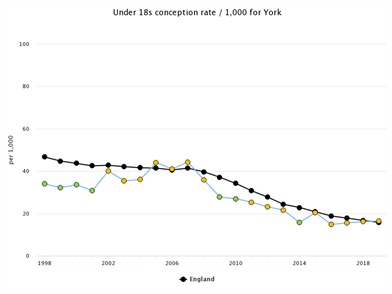 Despite this, it is important to recognise that the absolute numbers of obese children for both age groups in York are high. This means that whilst York is doing well in comparison to other areas of England, obesity is still impacting on the health of children in York.

The proportion of women who smoke at the time of their delivery is greater in York than any of York's statistical neighbours, and has recently risen above the national average for the first time in five years. This is an important indicator because smoking throughout pregnancy can harm the growth and development of infants and can affect their development in early life.

A greater proportion of 15 year olds in York report having ever consumed an alcoholic drink than the national average (however this has only been measured once in 2014/15). Guidance from the Chief Medical Officer for England recommends that young people under 15 should not drink alcohol at all. This is an important indicator because drinking in early teenage years can be particularly harmful to health. Additionally, young people who start drinking alcohol at an earlier age tend to drink more frequently and more overall as they grow up than their peers who started drinking at an older age.

Areas of inequality in York

The examination process at the end of secondary education has recently transitioned from ‘GCSE’ to ‘Attainment 8’. In York overall, the average attainment 8 score achieved by young people was higher than the national average. This reflects the GCSE attainment scores from the previous year. York has a higher GCSE attainment rate for children in care compared with the average for England and it’s statistical neighbours.

The rate of teenage pregnancy in the most deprived ward is double the York Median.

Women living in the most deprived wards are more than twice as likely to smoke during pregnancy compared with the York average.

By the end of key stage two, disadvantaged pupils are less likely to be assessed as having a good level of reading, writing, and maths. This is also true for pupils with special educational needs.

Starting and Growing Well Inequality Report Published in August 2018, this inequality report takes a deeper look into differences of experience for children and young people growing up in York. The report focuses on three interlinking themes, childhood obesity, self-harm in young people, and childhood poverty.

Young people not in employment, education, and training (NEET)

Young people who are not in employment, education, or training after leaving secondary school are more likely to experience further unemployment and ill health later in their lives. York has the lowest rates of young people who are NEET and the top twenty lowest nationally. Recent trend data suggests there has been no significant changes in numbers. Despite this, some groups of young people continue to struggle to find employment, education, or training. This includes people from deprived areas or with few qualifications. 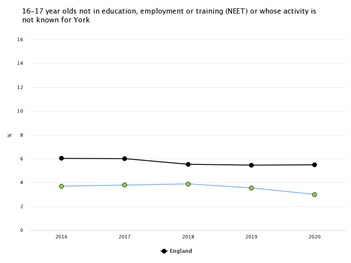 There are a large number of vaccinations offered to children in the first few years of life, and throughout childhood. The data for York varies by vaccination type, but broadly York appears to be similar to or slightly above the national average for vaccination rates. However, this is almost always below the 95% coverage that is estimated to be necessary to protect the population. This remains an important opportunity to improve health protection for York and the region.

The picture of childhood dental health in York is mixed. York has a larger proportion of five year olds without any dental decay than both the regional and national averages. However, York has a very high proportion of children aged 0-4 admitted to hospital for dental decay among York's statistical neighbors. It is possible this a refection of York's local admissions practices, rather than a reflection of high levels of dental decay.

Breastfeeding has many known benefits to babies: it protects them from infections and diseases, helps with bonding, and can protect against adulthood conditions such as cardiovascular disease. The proportion of babies breastfed at 6-8 weeks after birth has not been measured in York. However, a 76% of York babies received their first feed of breastmilk immediately after birth than locally (56.4%) or nationally (67.4%). 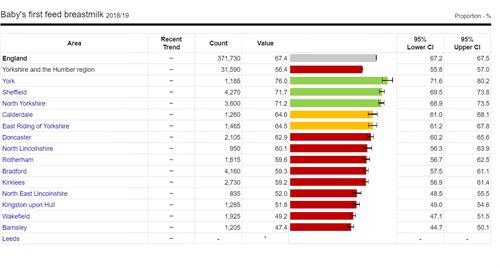 Smoking is a major cause of preventable early death and ill health, York has an ambition for all young people in York to be part of a 'smoke free generation'. The proportion of 15 year olds in York who report smoking either occasionally or regularly is similar to the national average. However, this has only been measured once in 2014/2015.